Trust the process, everything
works out in the long run.

Over the last five years, I have had the pleasure to work on several film projects as a producer, director and Executive Producer. I love film so much that I have gone as far as investing in several local film projects here in Canada and beyond just because I wanted to be involved in the industry.

Having pivoted from a career in Finance into a Principal consultant in two distinct industries; Creative (film) and service-based (immigration) ecosystems via Tech; I have been able to develop my technical skills, business acumen, and people management skills in a way that has been truly transformative in my career.
Learn More 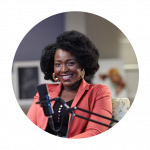 In this first episode of The Bukky Wonda Podcast, I go deep into my story. I reveal how I got started in this industry and what keeps me going. I hope you learn something from this.
Listen

Dan is one of Calgary’s most sought after Boom OP and sound technician. He has worked on several major projects including Netflix’s Lost in Space. This is a special episode for all those who wants to know what it takes to make it as a sound man behind the scenes.
Listen 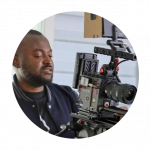 One of Calgary’s most respected producers, Sylvester opens up about his story and how he made it in the film industry.
Listen
get in touch

Bukky Wonda was a panelist at the Association of Black Conservatives 2021 Black History Month event on Arts, Media and Culture.

Speaker on Financing your business at the Bramathematics

Bukky, as one of the three panelists weighed in on a crucial perspective about managing finance and balancing expectations.

Bukky Wonda was one of the hosts at the 2020 edition of our flagship festival called Ethnik Festival of Arts and Culture, an annual Alberta’s Premier Black History Month Celebration.